Here are the first lot of unmarried Zulus, the umCijo regiment "the sharp pointed". They were also known asuKhandempemvu. At Isandlwana they formed the spearhead for the attack on the camp and wiped out the rear ranks of A and F companies of the 24th Foot. They also fought at Gingindlovu and Ulundi. A tough and brave regiment: the Connaught Rangers of the Zulu army!

Well these have taken much longer than I thought they would. I reckoned that as soon as I had got the skin done there wouldn't be much more to do but had counted without all their charm necklaces, animal tail adornments and the shields, which take ages. 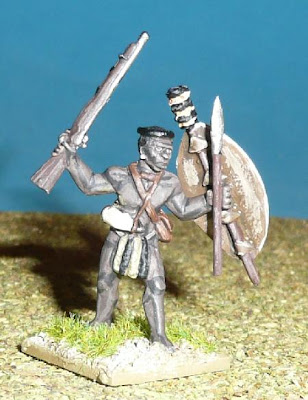 I have got another eight figures nearly ready; I just need to do the shields and spears so should get them done at the weekend. I have eight new figures to do with the white cow-tail adornments and I ordered another 12 figures today. 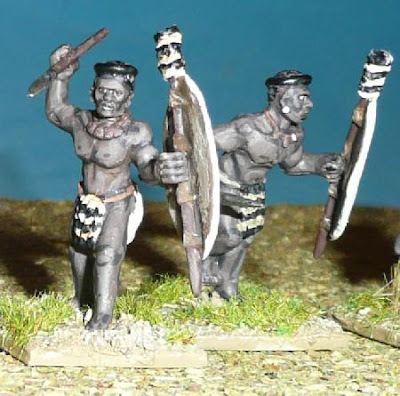 For the Sword in the Flame rules you need 20 figure units so this is not quite half of what I will need. They are painted as the iNdlondlo regiment who fought at Isandlwana. 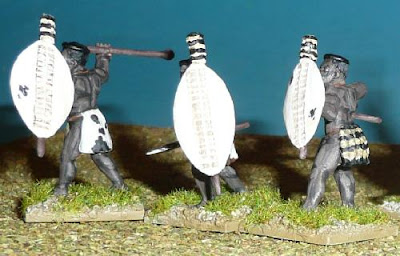 I will review the figures themselves when I have got some more done. Suffice to say that they look much better painted than unpainted -even when it's my rather "impressionistic" style!
Posted by legatus hedlius at 13:36 1 comment: 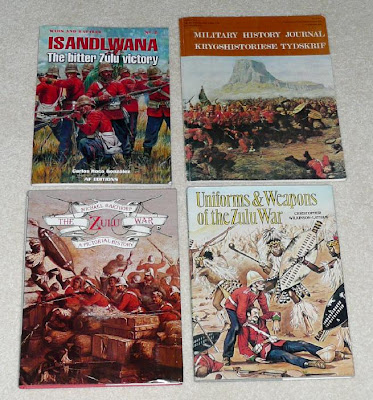 There are far more books on the Zulu Wars than on the Sudan War of 1883-85 but I was pleased to pick up some less available ones this weekend. I went to stay with my friends in Bath who have a gorgeous 5 storey Georgian town house. The best thing about Bath is that it has a higher proportion of independent stores than any other town in Britain. It is particularly well served for book shops.
I bought four books which I haven't seen before.
Uniforms and Weapons of the Zulu War by Christopher Wilkinson-Latham
The Zulu War A Pictorial History by Michael Barthorp
Isandwana, The Bitter Zulu Victory by Carlos Roca Gonzalez
The Zulu War Centenary Issue by the South African Military History Society
These all contain some great information and wonderful illustrations. I bought three of these books from Bonapartes, a shop which specialises in larger scale military figures and always has a great selection of second hand military books in stock. http://www.bonapartes.uk.com/ A couple of years ago I bought 4 volumes of Wargames Illustrated from them. Well worth visiting if you are ever in Aquae Sulis.
Posted by legatus hedlius at 14:06 No comments:

More Zulus on the way.. 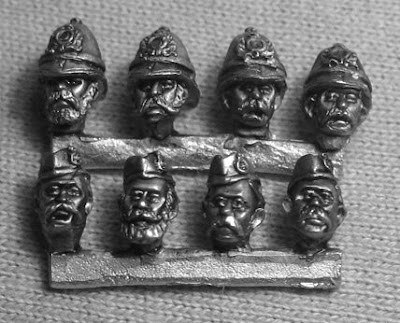 I have nearly finished my first sixteen Zulus from Empress miniatures. They aren't perfect but look very good en masse. The faces are good, some very, very good. They are a little small some of them, compared with the British, and the anaotomy is not as good, say, as Copplestone's Ngoni (particularly the arms and legs). The real problem is the chest area where the relationship between the deltoid, pectoralis major and clavicle is not quite right. Odd, as the sculptor has modelled the stomach area really well and caught that pot-bellied look from contemporary photographs. Still with a shield and weapon it shouldn't be too noticeable.

Empress have come out with two more releases in the last few days. Firstly, some Zulu's with the classic cow-tail decoration on arms and legs. I am going to use these as unit leaders as in battle these decorations were unlikely to be (but not never) worn. Secondly, a set of British heads, four with Glengarrys and four with the (white) helmets with badges on (as seen in the original film Zulu and also worn by the 99th foot). This deals with the issue raised by Lt Col Mike Snook, in his review on the Rorke's Drift VC site, regarding the trumpeter having a helmet cover, which didn't come in until later in the campaign.

http://www.rorkesdriftvc.com/forum/viewtopic.php?t=1301
I have ordered two packs of the cow-tail Zulus and the head set. My experience co far with Empress is that their dispatch is very fast.
Posted by legatus hedlius at 03:57 3 comments:

At last a promising range of Zulu War figures. 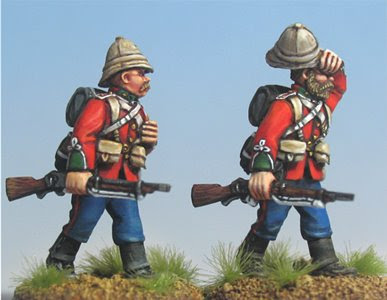 The new Empress British. The painter did a great job. If I can do half as well on mine I will be pleased!

As I noted on the introduction to my Sudan blog it was the film Zulu that got me into colonial wargaming and I painted a lot of those Revell plastics. I never found a satisfactory range in 28mm. The two main rivals, I suppose were Black Tree Design and Redoubt.
Black Tree Design have a wide range of poses but the anatomy of the figures is variable: some are excellent, some are a bit odd. The real problem with them is the strange interpretations of the helmets with odd ridges on them where all there should be are seams.
The Redoubt range is also comprehensive as to different troop types although their are less poses of individual infantry. The figures look quite old and on the internet anyway look a bit indistinct in their sculpting and casting. One of the reasons I like the Musketeer Miniatures figures so much, even though they are rather exaggerated compared with, say, the Perries, is that you know exactly what you are painting.
So I was delighted to see a new range of Zulu War figures by an equally new company called Empress Miniatures. http://www.empressminiatures.com/ These are sculpted by Paul Hicks, who is rapidly getting up there with the best sculptors on the planet now. They look a bit chunkier than my usual taste (but that is often the result of the photography) but are very crisply sculpted. I immediately ordered one of each of the four packs that have come out.

The owners (who claim to be women, which is unusual in itself) say that the range will be complete for all troop types in the war. Sensibly, they are going for a release schedule of first some redcoats, then some Zulus, then back to British again, so you can build an army and its opponents at the same time.
I know these will distract me from the Sudan but I have always wanted to do Zulu War British! 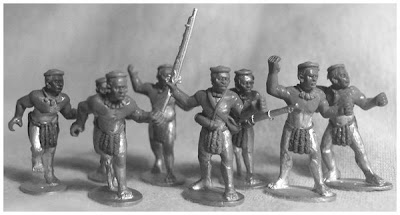 The first Zulus are up on the site too now and I just took delivery of a batch of those as well.
Posted by legatus hedlius at 09:46 2 comments: