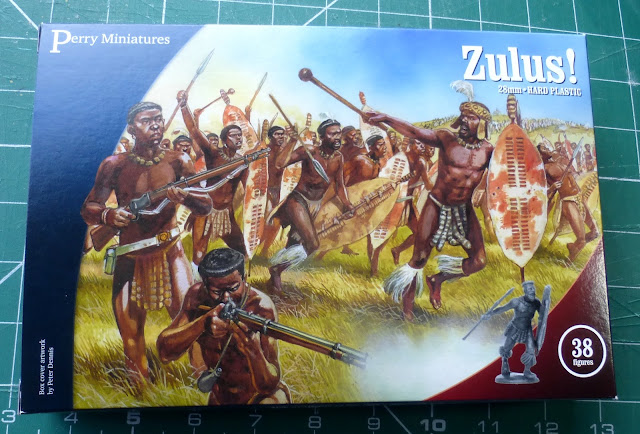 I have a lot of unpainted Zulus but none of them are really satisfactory.  Empress' British metals are marvellous but their Zulus are small, anatomically crude, misshapen things, despite their historical accuracy,  I have quite a few Wargames Factory packs, some of which I have painted and these are, surprisingly given their patchy reputation, rather good.  The Wargames Foundry new metals are based on Mark Copplestone Darkest Africa figures and are quite nice, if on the large size. Warlord Games plastics were nearly very good but they include a non historical armband on their right arms to hide the forearm upper arm join. 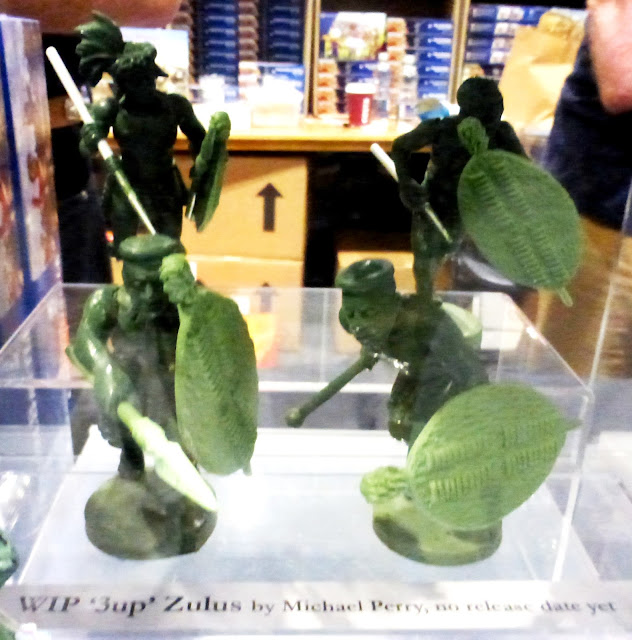 So when I saw the greens of the new Perry Zulus at Salute in 2017 I thought they were just the job. Less than a year later they are on sale and my first (!) pack arrived today. Amusingly the Perries have called them Zulus! (with an exclamation mark).  I can't think of another army that would justify an exclamation mark in their name on a box. 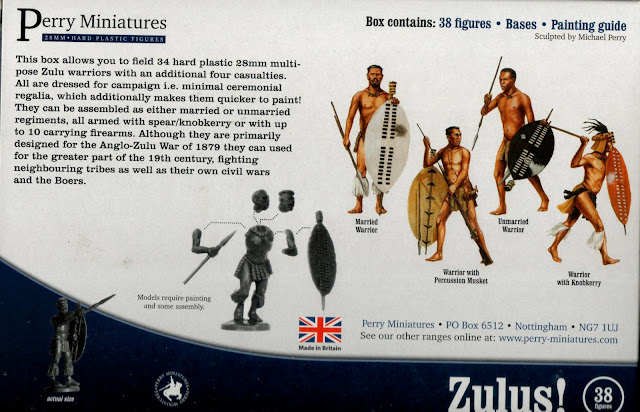 You get 38 figures in the box which is not bad at all, given the numbers in boxes of plastic figures  (yes, Victrix) seem to be reducing faster than a Toblerone.  Unlike Warlord Games (only 32 figures in a box), who offer separate married and unmarried boxes, the Perry box contains heads for both. 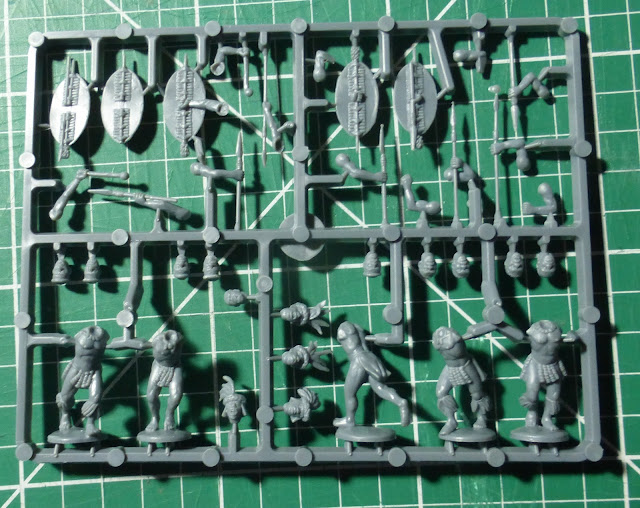 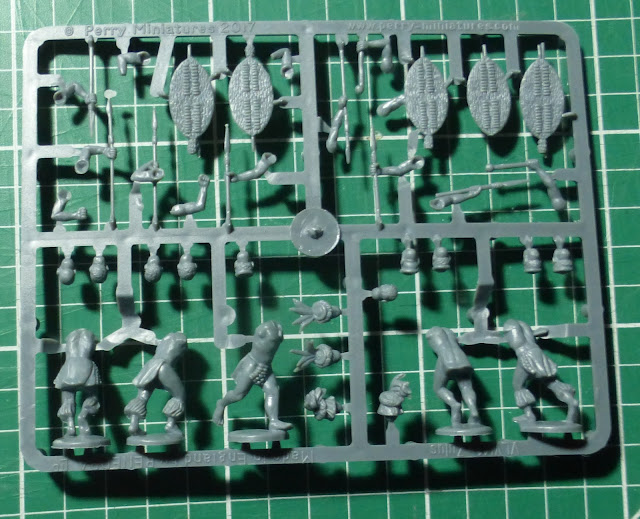 There are two different sprues in the box.  You get six sprues of five warriors which come with a choice of 12 heads per sprue, including some with more ornate headdresses for leaders. Upper body and legs are in one piece but heads and arms (both of them individually) have to be added, so they might take some time to assemble. 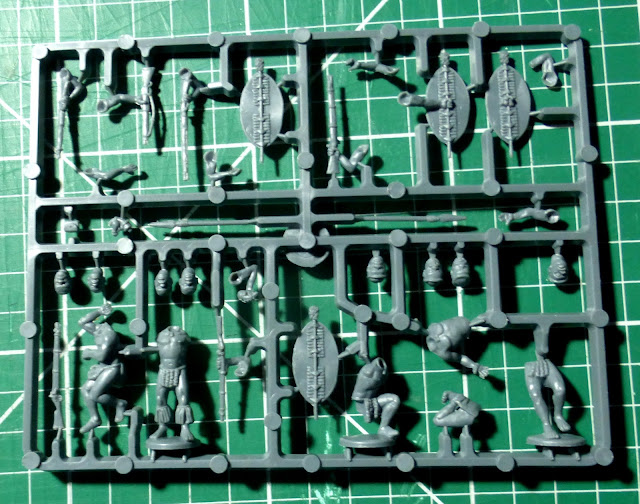 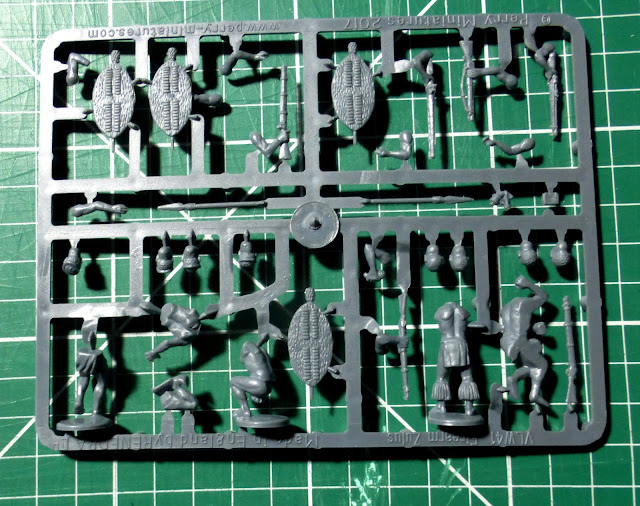 There are two sprues designed for Zulus with muskets and also  included are two casualty figures on this sprue, which are useful for rules like The Sword and the Flame, although painting casualties always seems like lost time. 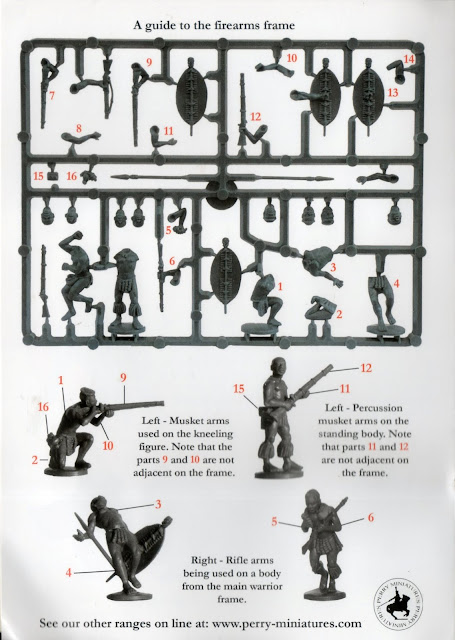 There is a four page pamphlet inside giving a brief history of the Zulus by Col Mike Snook, some examples of Zulu regiment shields and a helpful guide to assembling the firing figures.  Although I don't like assembling fiddly plastic figures my new magnifying device will help immensely.  If I have any time at the weekend I will try and get some started.  I need some more figures to complete a force for The Men Who Would be Kings, so will concentrate on getting those prepared.
Posted by legatus hedlius at 14:48 8 comments: