I saw this in a local garden centre last weekend and should have bought it; although he is carrying what looks like a Lee-Enfield rather than a Martini Henry.  The black facings come from the film Zulu, I think, where the recent digital remastering has turned what was a very dark green into black on the otherwise stunning looking blu ray.
Posted by legatus hedlius at 14:47 2 comments:

The black shielded umCijo (the sharp pointed) regiment (also known as the oKhandempemvu) formed part of the central "chest" at Isandlwana. There were 2,500 of them at the battle and their unmarried regiment was made up of 28 year olds who were heavily involved in the central attack. Indeed, they were so keen they actually false started the attack and had to be brought back. The induna of the umCijo was Mkhosana kaMvundlana who was instrumental in getting the Zulu centre moving again after their initial attack was stalled by the volleys of the British, although he was killed in the resultant charge as the Zulus poured out of the dongas where they had been sheltering. Nevertheless, it was this action that drove the British line back to the camp.

They also formed the left horn at Khambula and formed part of the 12,000 warriors under Chief Somopho at Gingindlovu.


The Sword and the Flame units are twenty figures but the umCijo made up over 10% of the Zulu army at Isandlwana so I will probably paint another twenty figures to join them.  I also need a figure to represent the inspirational Mkhosana.

Most of these figures are Empress miniatures but there are a few of the new Foundry figures in there too.  The younger warriors tended to have the smaller shields so I have given them the smaller Zulu shields that Empress helpfully sell seperately.

Next I will paint a brown shield regiment but am not sure which one yet.  I have two more units of twenty based and ready for undercoating.  As with my Sudan force I am probably aiming at an army of around three hundred all together, which at the current rate will take about fifteen years!  The problem is that Zulus just aren't quick to paint!
Posted by legatus hedlius at 14:34 No comments: 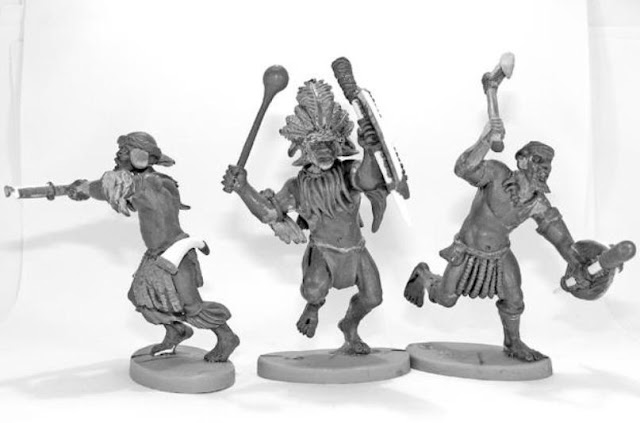 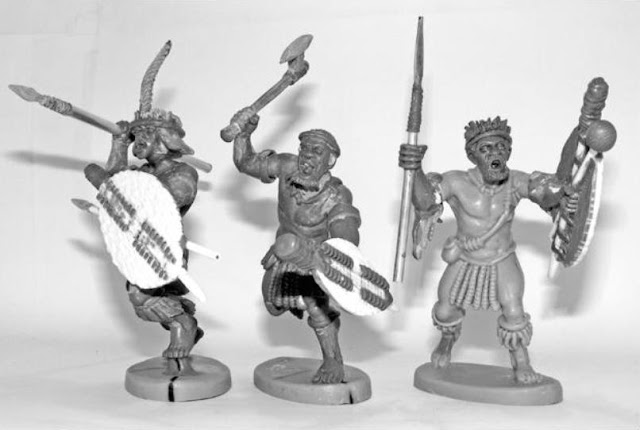 I wasn't impressed by the recent greens of the forthcoming Warlord/Empress Zulu War plastic British.  I think Paul Hicks' sculpts for the metal Empress British are the best 28mm Colonial figures out there (and I include the Perries Sudan range in that).  The Empress metal Zulus are horrible, however, with chunky, wierdly proportioned anatomy which makes them look more like pygmies than Zulus. These new plastic Zulus look tremendous, however, and look like they will become the standard for Zulus in this scale.  Can't wait to see them!

My isijula Zulu throwing spear, showing the binding joining the tang of the blade to the haft

One thing that plastics can do better than metals is good weapons and these are the first accurate representations of Zulu spears I have seen in this scale.  I own a Zulu Wars period assegai (throwing spear) myself and they appear to have modelled the plaited cane binding really well.

Posted by legatus hedlius at 00:44 No comments: