A Wargamer's Guide to the Anglo-Zulu War by Daniel Mersey: A brief review 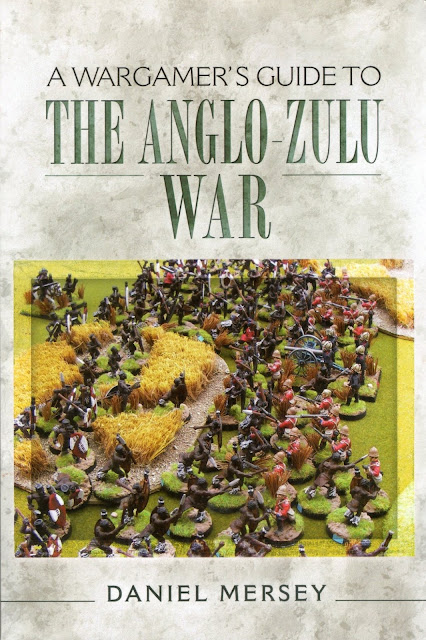 Dan Mersey is well known as the writer of the successful Lion Rampant, The Pikeman's Lament and The Men who Would be Kings rules, among others.  He has also produced a series of wargames guides, such as this one, published this week, on the Anglo-Zulu War.  Now, I am notoriously useless at looking at wargames rules and working out how they might play, however, as this is not a set of rules but a guide I can offer a few thoughts.

The book has seven chapters which I will consider in turn.

The first nine pages are a very brief summary of the war mentioning the overall staraegy and covering each major engagement in a few sentences.  Mersey has an engaging, light style as a writer and as a general introduction to the war, for those unfamiliar with it, this can't be beaten.

This chapter starts with 15 pages on the Zulu army, its organisation, weapons, equipment and tactics.  There are two tables: the first lists the Zulu regiments available in 1879 with their age ranges and numbers (if known) and the second gives a very general guide to shield colours (although the author recommends the much more thorough Michael Farnsworth guides which you can find here and here.  There are 11 pages on the British army and five pages on allies and colonial forces,  These are subdivided in the same way as the Zulu section but, again, the information is very sketchy although, as elsewhere, Mersey recommends further sources.

This 15 page chapter covers Nyezane, Isandlwana, Rorke's Drift, Hlobane and Khambula.  It dpes not cover Intombe and, more surprisingly, Ulundi. Each battle gets a couple of pages of historical description followed by a page or so on wargaming the battle which offers up battle specific suggested rules or suggestions on particular parts of the battle to focus on. For Hlobane, for example it is suggested focussing solely on the fight for the plateau and the British getting extra victory points for collecting cattle.

This presents some campaign specific ideas and things to consider.  It is not a guide to fighting the war as a campaign over a series of games, it should be noted.  Aspects covered here include balancing shooting and movement ranges, army ratios. terrain and concealment, hidden units and ambushes. ammunition supply, marksmanship, fortifications and laagers and recycling Zulus.  Personally, I hate recycling!  It brings back memories of a game I had at Guildford Wargmes Club where these cursed recycled figures just kept coming.  Sorry, but if you haven't painted them you can't use them!  Mersey does suggest some modifyers to prevent limitless, automatic recycling, however.

Here we get a one page overview of d13 different sets of rules from Jack Scruby's 1974 African Colonial Wargames Rules to the latest incarnation of Death in the Dark Continent (he mentions the 2017 reprint).  It covers general period rules such as Black Powder, colonial sets like The Sword and the Flame, as well as campaign  specific rules like Dave Bickley's The Washing of the Spears,  Being generally too stupid to understand wargames rules and preferring ones with pretty pictures there were quite a few sets here I hadn't heard of.  Oddly, he doesn't mention his own The Men Who Would be Kings Rules and we had an excellent big battle game using these.

This offers a brief paragraph on miniature ranges offered by manufactures in 30mm, 28mm, 20mm, 15mm, 10mm and 6mm sizes.  Just looking at the 28mm figures, with which I am more familiar, it is less satsfactory than some of the other sections.  It is not surprising that the very new Perry figures aren't mentioned but it seems odd to leave out Black Tree's large range (despite the British infantry's weird lemon squeezer helmets) and also not point out that Foundry has two very different sized figure ranges: the original (but small) Perry brothers sculpted ones and the later (now sold as Casting Room Miniatures) ones which offer some particularly nice (and big compared with the weedy Empress ones) Zulus, based on Mark Copplestone's Darkest Africa tribesmen.

This offers some half a dozen scenarios giving an outline of each scenario, a suggested description of forces involved, how to set up the table, rules considerations and victory conditions for each. The scenarios are: Protect the convoy, Ambush on the outcrop. Death to the Prince!, Strike at dawn, Beware the horns and  'Form square!'  Each scenario is covered in about two and half pages.

Finally there is a two page appendix of further reading (dominated by Ian Knight, of course).

Overall this is a very good introduction for those who haven't considered Zulu wargaming (or, perhaps, even colonial wargaming before).  For those coming to it from watching Zulu there are plenty of references to, and quotes from, that film in the text.  However, in trying to cover all aspects; history, battles. forces, appearance, painting, figures and rules it results in each section being rather thin.  For me the interesting chapters were the Key battles, Wargaming the Campaign and the Scenarios Chapters.  For the rest I have already made my decisions or figures and rules and have read many books on the campaign generally.  That said, even just skimming through it, for the purposes of this review, has got me thinking about getting on with those remaining 24 Zulu figures I need for my The Men Who Would be Kings force and trying some of the scenarios. 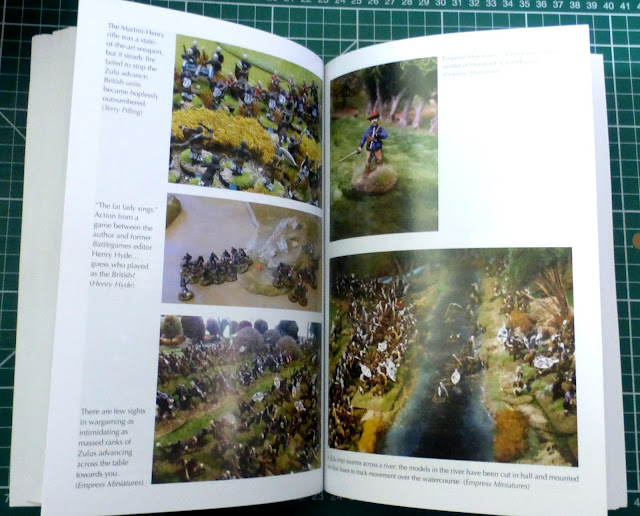 There are eight pages of colour photographs of wargames units (all in the centre of the book) provided by a number of different sources and of varying quality as regards painting and scenery.  Personally, they are too small to have any impact as eye candy and too many are of close ups of units so that no idea of the sweep of a Zulu Wars battle is captured.  I would have rather seen some maps (of which there are none whatsoever in the book) for the battles or even the scenarios.

Still, I don't regret buying it and the fact it is not rule specific (like the Black Powder guide) is a bonus.  Probably not for experienced Zulu Wars gamers but ideal for beginners and useful even for dabblers like me.
Posted by legatus hedlius at 07:52