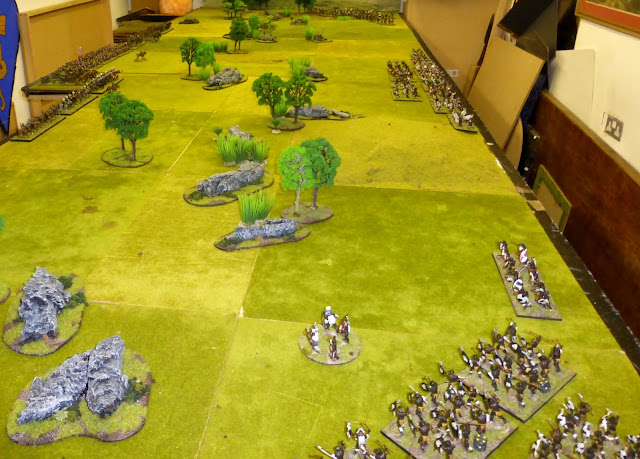 It's been over two years since I posted on this blog but thanks to Eric the Shed I got to play a Zulu Wars wargame this week using the new The Men who Would be Kings rules by Dan Mersey.  I have played his Lion Rampant rules several times and enjoyed them because they are simple for someone who struggles with complex rules, like me. 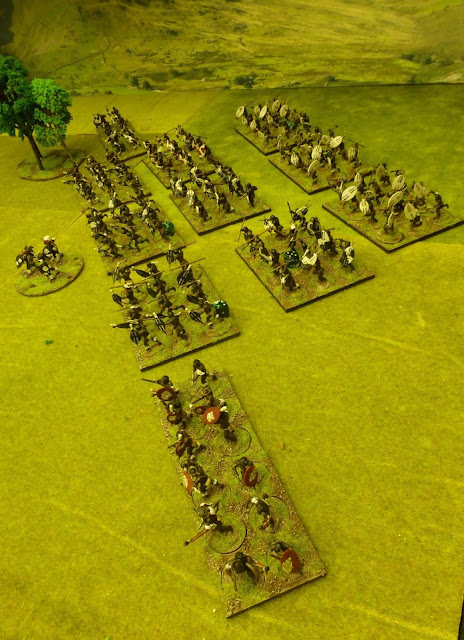 I suspect that he probably didn't really contemplate them for a game of some 600 figures but with five players it worked very well.  I took the right hand horn of the Zulus.  I had nine units of Zulu warriors and two units of rifle armed skimishers. Facing me were a force of Boers and natal Native infantry.

Helpfully. Eric had produced cards giving the different types of units statistics and special rules. This made things a lot easier as I don't have the rules yet.  More importantly I remembered my glasses, as my eyesight is getting worse. 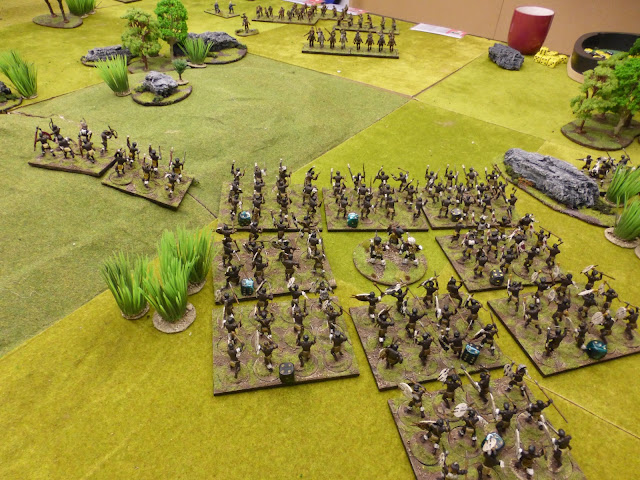 Now as regular readers know, I don't play enough games to ever learn any rules and I can't visualise how they work by reading them either.  I spend  a lot of time reading papers for work and after a week reading dozens of reports and papers on the Portuguese roads programme my brain would have had little room for absorbing anything else anyway.  Thinking like a Zulu, I just charged at the Boers. knowing that I have never met a nice one, anyway (apart from that woman, Elize, I met in Gaborone). 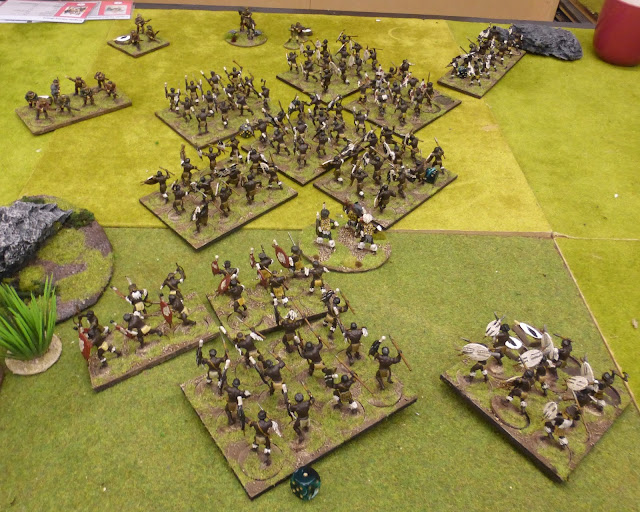 Even though I had a lot of Zulus, the rifle fire of the Boers was very effective.  Basically, if you take even one casualty you are pinned and need to be reactivated the next move which means that you can't move the following move.  The officer can reactivate a pinned unit for free (this might have been a house rule on the night) so the trick was to use your units behind to leapfrog forward (units can pass through friendly units.  The dice on the units above simply indicate that there should be another 4 figures on each unit and they would count up until they had gone and then you would remove actual figures. 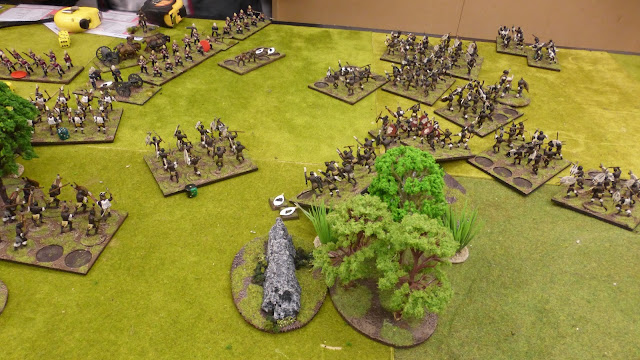 Eric the Shed has posted an excellent account of the game and his thoughts on the rules here, so my own vague thoughts are not needed.  I really enjoyed the rules and thought they gave quite a good colonial game.  We didn't have time to finish but the British regular infantry had formed up and were ready to receive the charge of the massing Zulus.  Whether we would have got through the rifle and artillery fire is a moot point but I think the Zulus had destroyed more units than the British at the end of play.

There were a few negative comments from more experienced gamers about certain individual actions that weren't dealt with (shooting at charging figures on the way in, cavalry counter charges, morale etc) or were different from Lion Rampant.  My view on this, simplistically, is that it is best not to break down the individual elements of the game but see how it plays overall.  Does it give a good, balanced final result, not do individual aspects make sense in isolation?  No doubt the author has learned from Lion Rampant.  The individual (and frustrating) turn by turn necessity to activate units has gone, for example.   I suspect if you start to fiddle with it and add too many house rules it may destroy the way the different elements of the rules combine to give a balanced result. But then, I'm not very clever.

I don't own the rules but based on this I will certainly  buy them and, perhaps, will try them out solo using some of my Sudan troops.  It will also be interesting to see how they work against less 'tribal' opponents, such as Pathans. I would also like to see how big the contemplated forces are in the rules, to see if they work for skirmish gaming as well as big battles.  Great fun!
Posted by legatus hedlius at 14:21

Labels: games, The Men who Would be Kings