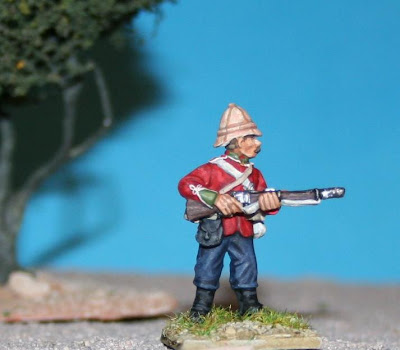 My first British have been sitting on my workbench for a year now. To be honest I have been a bit frightened of them and happier painting Zulus. This weekend I decided to try to finish one figure to see how it looked. Well, I needn't have been worried; he was very easy to paint. Now I love the Perry figures but sometimes they can be tricky to paint but the Empress one was very easy. So much so that I immediately started on a few more including my rocket team. While watching Strictly Come Dancing with the family I assembled the rest of my first batch of Wargames Factory plastic Zulus and based a few more Empress British. One thing, though, I can't think that too many British soldiers would be fighting Zulus without fixed bayonets so I am going to make sure all my subsequent figures have them. I am going to approach the Zulu war slightly differently than the Sudan in that whilst I will try and reproduce every regiment at something like 1/33, for the 24th foot I will paint more figures so I can do Isandlawana and Rorke's Drift with rather more figures on the British side. 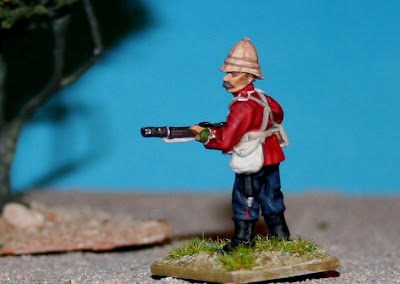 I was hoping to finish three Zulus and Masai warrior today but my daughter hogged my desk all day doing GCSE course work (she claimed!) so I didn't quite get them done. This is doubly annoying as I go abroad on Tuesday and am not back until October 14th. Grr! Just when I was getting into my painting again too. Oh well. I will just have to take one of my Zulu War books away with me to keep me inspired!
Posted by legatus hedlius at 14:46 1 comment:

10mm figures by Steve Barber
I don't do 10mm figures on account of the fact that I can't see them to paint but if I did I might be quite tempted by this new range from Steve Barber models. http://www.sbarber-models.clara.net/main.htmlI know this firm best from its enjoyable Prehistoric Settlement rules. Barber's figures can be rather crude and many of his 25mm figures suffer from big head syndrome. There are the occasional figures with strange anatomy here but on the whole I think these are rather good.

I love the little Hales rocket team here!
Posted by legatus hedlius at 13:28 No comments:

Zulus with Rifles from Empress Miniatures

It's always been slightly annoying that rifle armed Zulus weren't available seperately from Empress but now they have gone and rectified this with this very nice set. This is excellent news. Once I have finished my next batch of Beja I'm going to move back onto Zulus for a bit. I wasn't very happy with the way that the first ones came out so am hoping the next batch will be better. 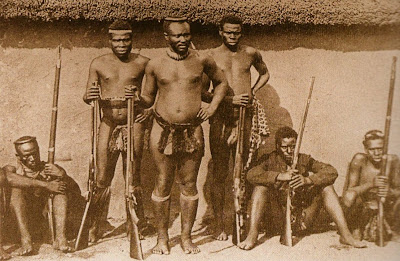 Prince Dabulamanzi KaMpande, Cetshwayo's half-brother was the commander at Rorke's Drift and Gingindlovu. His troops have a wide variety of firearms.

The Zulus had been arming themselves with firearms for some time before the Zulu War. One contemporary report estimated that there were around 20,000 guns available to the Zulu at this time. However, it was reckoned that only about 500 of these were modern breech loaders. There were rather more percussion guns but most were old, often condemned, flintlock muskets. The British army recovered nearly 450 guns from the Zulus after the Battle of Gingindlovu but only five of these were Martini-Henrys (presumably captured at Isandlwana) with most being old British Tower or German muskets. In addition the gunpowder the Zulus had was very low quality and bullets could be anything from bits of metal scrap to stones. So although the Zulus had guns, they would not have been very effective.
Posted by legatus hedlius at 14:11 No comments: